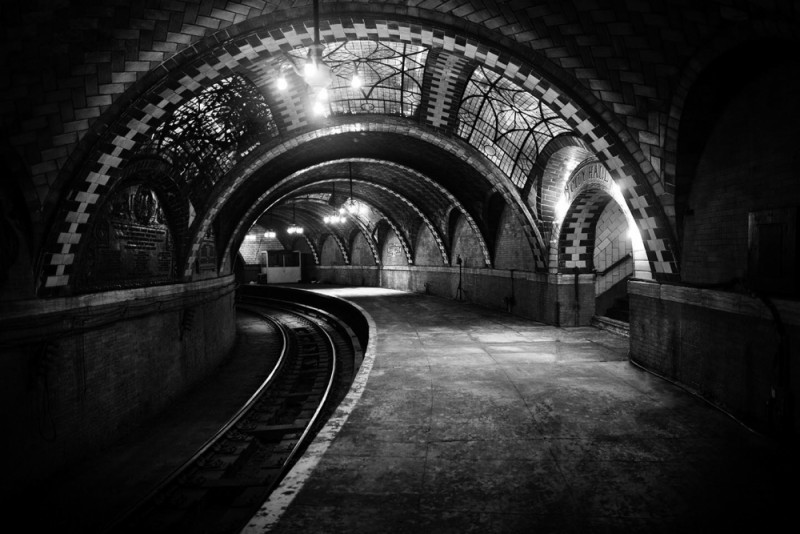 Posted by John-Paul (Madison, NJ, United States) on 16 March 2008 in Architecture and Portfolio.

the old city hall stop that lays abandoned within the subway system of new york. built as one of the original subway stops in nyc, it was designed to be the showpiece of the subway system. it is located directly beneath new york city hall and city hall park, which is why there are skylights that let natural light into the station. it is the only such station with skylights. while this stop was in operation, it was only open during the day and could only be used as an entrance to go uptown. when the station was closed at night, trains ran to the south ferry loop instead.

city hall was closed in 1945 due to lack of ridership and proximity to the brooklyn bridge station, which was only 600 feet down the track. brooklyn bridge was also an express station. the track curve in this station, besides being very loud, created unsafe gaps between the train and platform.

the arched door off to the right led to the mezzanine area, where riders would enter and buy their tickets before coming down to the platform level. since City Hall station was closed before tokens and turnstiles were used, riders would pay their fares by tickets in a chopper.

you can read more about this unique station here. go to "City Hall IRT" under "Entire Stations." besides City Hall, there's a lot of other pretty cool info about abandoned/unfinished work within the new york subway system.

you can still see this station today by riding the 6 train. altho the 6 train terminates at Brooklyn Bridge station, it uses the City Hall loop to turn around and get from the downtown platform back to the uptown platform, but the experience is not the same as being in this historic station. an added bonus of riding the City Hall loop is that as the 6 train curves back around onto the uptown platform of the Brooklyn Bridge station, you can see portions of some abandoned platforms. when the platforms at Brooklyn Bridge needed to be lengthened to adjust for longer subway cars, it was easier to lengthen them to the north, instead of trying to lengthen the curved platforms to the south. lengthening of the platforms to the north also allowed Worth Street station to be closed.

this station is not to be confused with the City Hall (BMT) stop, which has a lower level that was never completed and is used for train layups.

Nice shot. I Think , This is Mysterious palce :)

A beautiful station and so beautifully captured and documented in your shot. I'm surprised you were able to make your way into this closed station and even more surprised that you were able/allowed to photograph it. See my post from yesterday to understand my basis for this statement.

Once before I had stumbled upon your site, and, then, again this morning I find myself here and totally fascinated (and impressed) by your passion for film and its intricacies and unique properties. I admire your zeal for experimentation and discovery. If I were a betting man, I'd bet that you will make a fine doctor.

Your portfolio of work here is truly fascinating. My best wishes to you as you continue to pursue your passions.

A great black and white.

Will from Gainesville, United States

great shot!...so can you actually visit the station and shoot?

Wow - great eerie shot of the lonely station, and the back story is very interesting too. Thanks for sharing!