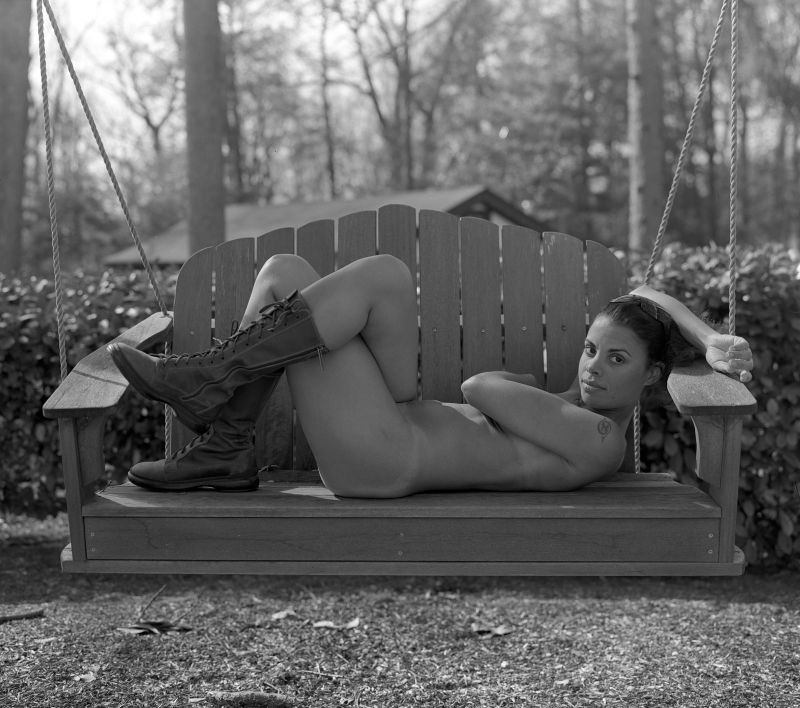 one thing that stands out about this day was that it was fairly cold and nicole was a real sport for agreeing to pose nude outdoors, in march nonetheless.

technically, i shot 4x5 Kodak TMY-2 and developed it in Rodinal, diluted 1:50. what's the point of using a solvent developer with large format film? go for more acutance! i also shot this photo with the lens wide open at f/5.6. shooting wide open is risky, especially with 4x5, as there's not much depth of field when you're wide open and using a 135mm lens, but i got lucky and nailed the focus. i shot wide open for two reasons - one, so that i could use a yellow filter lighten and darken certain tones and two, so that i could use a faster shutter speed, just in case the wind started blowing the swing around, as i didn't want motion blur. but, i guess if the wind began blowing, it could've moved the swing and changed my focal point. i got lucky all around!

Hi Jean-Paul, you may remember me from Photo.net. Are printing with an enlarger? I don't know what your activities are, but this image is worth the best possible fibre-based paper - selenium toned whatever. It's a gem. I'm soon getting into a 4x5 myself, and seeing this image of yours ... wow ... You are very fortunate (to have such beautiful and supportive friend as model, yes ) and a very talented man with a camera.

I think its not bad if you try more contrast on this shot .
Well done!!